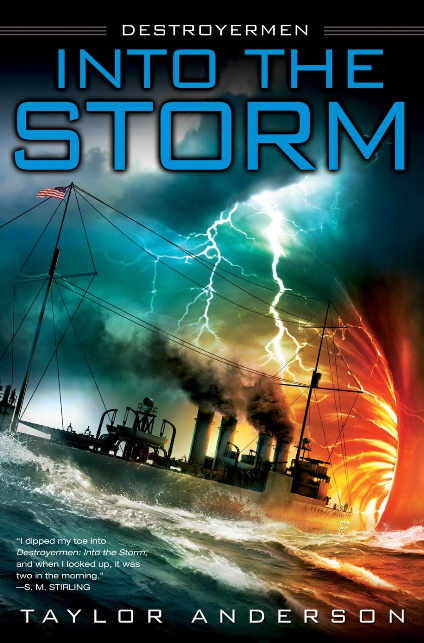 The dawn of the Destroyermen – an imaginative alternate history saga.

Pressed into service when World War II breaks out in the Pacific, the USS Walker – a Great-War vintage ‘four-stacker’ destroyer – finds itself in full retreat from pursuit by Japanese battleships. Its captain, Lieutenant Commander Matthew Patrick Reddy, knows that he and his crew are in dire straits. In desperation, he heads Walker into a squall, hoping it will give them cover – and emerges somewhere else.

Familiar landmarks appear, but the water teems with monstrous, vicious fish. And there appear to be dinosaurs grazing on the plains of Bali. Gradually Matt and his crew must accept the fact that they are in an alternate world – and they are not alone. Humans have not evolved, but two other species have. And they are at war.

With its steam power and weaponry, the Walker’s very existence could alter the balance of power. And for Matt and his crew, who have the means to turn a primitive war into a genocidal Armageddon, one thing becomes clear. They must decide whose side they’re on. Because whoever they choose to side with is the winner.